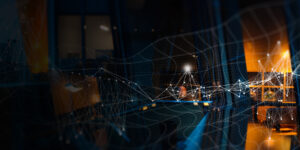 Initially used in the military for aerial surveillance, drones are now commonly found in a broad range of civilian applications such as farming, climate monitoring, delivering goods and aerial photography.

The past decade has seen an explosion in drone use, with professionally licensed drone operators taking the reins from the original hobbyists to create a highly skilled and value-added service.

What are the applications of drones in surveying?

Land Surveying & Cartography
Drone mapping or photogrammetry is about creating accurate information from photographs. Using a combination of drones equipped with appropriate cameras and post-processing software, surveyors can produce precise and detailed maps of any area of land or specific site.

Construction Planning
Aerial images can be used in topographic surveys for pre-construction feasibility studies. In addition, designers can import the created images directly into their BIM or CAD software to carry out the engineering studies needed for the construction project.

Building Inspection
Drones can easily reach areas of buildings that would be difficult or impossible for a person to access safely. With live-video streaming and static image capture, a surveyor can inspect every part of the building using a drone.

What are the advantages of drones over traditional surveying methods?

1. Speed
Drone surveying is fast. Very fast. A drone can cover a site that could take a ground team weeks to survey in minutes. Similarly, with multiple teams and projects occurring simultaneously on a construction site, the picture can change rapidly. Drones have a

significant advantage in being able to produce regular progress reports for site management. Having this live, real-time data allows the construction team to make quick decisions based on accurate information, which can speed projects up significantly.

The high-resolution videos or static images means teams can communicate instructions with minimal risk of error.

2. Cost
As everyone knows, time is money. So increasing the speed of surveying reduces the cost. Using drones, there is no need for ground teams to spend hours, days, and weeks capturing data points that the drone can manage in minutes or hours.

But it isn’t only the direct cost of surveying. The accuracy and flexibility of the drone footage can reduce time in each stage of the construction project.

3. Accuracy
Using drones for site surveys reduces the scope for human error. With every centimetre of the site being captured digitally, there’s less reliance on ground personnel who could miss a small but vital detail, which would need them to revisit the site to rectify. In addition, as the site is recreated in 3D images using GPS data, millions of points can be used for measurements to ensure the final construction is as close to perfect as possible.

4. Repeatability
Using a drone, it’s easy for site management teams to arrange multiple fly-bys of the project site for regular progress reports to all the stakeholders. The regular analysis also reduces the scope for error in the project and allows the team to build up a progress portfolio of the site.

5. Location
Using live-data streaming technology, the drone footage can be broadcast worldwide for remote teams to watch in real-time. No longer do all the personnel involved in the project have to be on-site together for it to run efficiently. It also means that project teams can monitor multiple projects worldwide without incurring the cost and time of visiting sites in person.

6. Safety
Physically accessing hard to reach areas or dangerous places carries an apparent health and safety risk. Drones can go anywhere from the top of wind turbines to the internals of large process plant with relative ease.

On secured construction sites, drones are useful for identifying any perimeter fencing breaches which could allow non-authorised personnel on-site.

As you can see, using drones for site monitoring and inspection is a perfect solution to the historical problem of using ground-based teams to map sites. Drones provide an accurate, cost-effective, quick and safe alternative for all maintenance, surveying and monitoring on sites anywhere in the world.

Trumetric and our Drone Pilots are all competent to operate and are registered and approved by the CAA to carry out drone operations throughout the UK.

Our drone survey services can be combined with our Measured Building Surveys and 3D Laser Scanning to provide a holistic and accurate representation of the building, either as 2D drawings, a 3D model, or simply a record at a fixed point in time.